In the first week of January 2020, Planned Parenthood in New York State made a big announcement of a major merger and consolidation of five of its nine affiliates in the state. The announcement led with the exciting news:

Now, one year later, we can tell you that PPGNY has not had a very good first year. Almost immediately, its CEO came under fire for her internal racist ideas and her “white supremacist” management styles. Both of these reportedly had caused her dismissal from an earlier Planned Parenthood affiliate CEO job but were, apparently, ignored as she was given command of this “bold future of sexual and reproductive health care.”

These failures in racial management, which eventually led to an “open letter to the board of directors” by the minority employees of PPGNY, were combined with charges of fiscal mismanagement as the affiliate was unable to respond well to stresses brought on by the COVID pandemic. The CEO was fired and numerous studies and task forces were put in place to try to rescue PPGNY—all, apparently, to no avail.

As STOPP did our annual survey of Planned Parenthood facilities across the country at the end of 2020, we found PPGNY one of the biggest losers in terms of centers closed and areas covered. As 2021 begins, PPGNY is operating only 18 locations (17 of which commit surgical and/or medical abortions on site). Its facility in Watkins Glen is permanently closed, while another nine facilities (Glen Cove, Goshen, Hornell, Kingston, Massapequa, Monticello, Oneida, Rome, and Staten Island) were listed as “Closed until further notice.”

Although there was a temptation to blame all these adverse developments on COVID, it was interesting to note that, despite other PP affiliates operating in similar environments in New York State, the Planned Parenthood of Greater New York affiliate was the only one to suffer these closures.

A total of 12 states saw Planned Parenthood centers close in 2020, but the 10 closures made by PPGNY far outnumbered the closures in any other state.

One of the factors, as yet unexplored in depth, of the PPGNY situation is that PPGNY is one of only a few Planned Parenthood affiliates that is unionized.

Jim Sedlak is executive director of American Life League, founder of STOPP International, and host of a weekly talk show on the Radio Maria Network. He has been successfully fighting Planned Parenthood since 1985.

Planned Parenthood tries to make people believe that its primary mission is to serve millions and millions of individuals providing needed health care. Its actual purpose to be an instrument of population control and to use its physical facilities as a means of murdering people. We always remind those who question that statement that when Dr. Alan Guttmacher was president of the organization (1962-1974) it was called Planned Parenthood—World Population.

Over the last two decades, pro-lifers have been able to shrink Planned Parenthood’s empire. It went from 875 clinics in 2002 down to 587 at the end of 2019. Each year, STOPP conducts a thorough review of every Planned Parenthood facility in the United States and we are pleased to report that, in 2020, Planned Parenthood closed significantly more facilities than it opened.

According to our research finding, Planned Parenthood closed 33 facilities during 2020, while opening a total of nine new facilities. Thus, its count at the end of 2020 is 563 facilities—312 less than it operated in 2002. 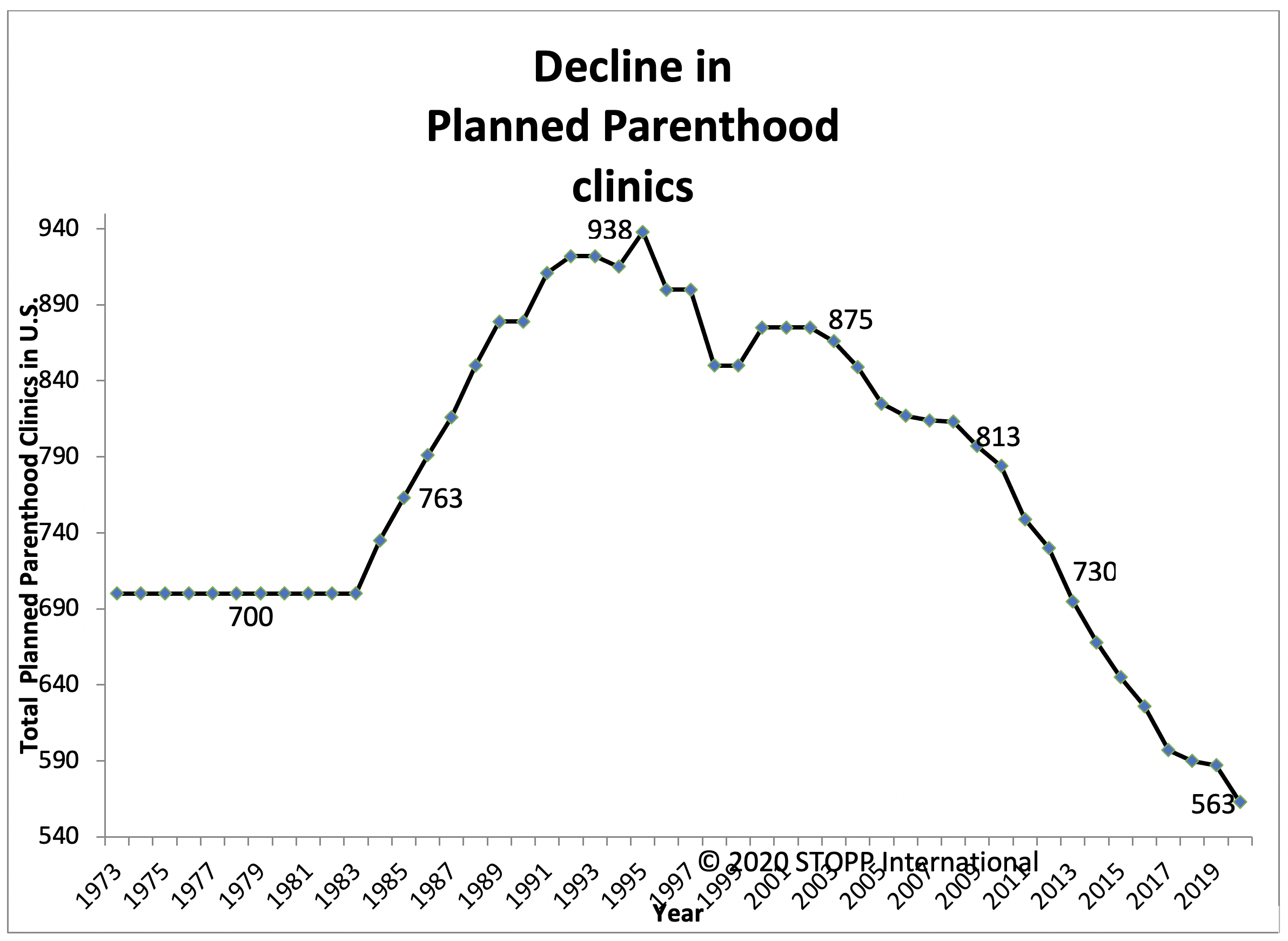 As a result, Planned Parenthood ended 2020 with:

Operation Rescue reports a total number of abortion facilities in the country as:


The effects of the Marian Blue Wave

2020 has been the first full year of the Marian Blue Wave. The results have been fantastic!

From 1985 through 1997, STOPP fought Planned Parenthood across the United States and in many foreign countries by making this into a spiritual battle and using Matthew, Chapter 10, as our battle plan. We encouraged all those getting involved in this struggle to take the time to grow a strong spiritual life. We pointed out that Planned Parenthood is an instrument of the devil and that there is no way we can fight the devil without Jesus and His blessed mother.

In 1997, God presented us with a special challenge. He brought us into a fight against Planned Parenthood in Amarillo, Texas. This was a place where the newly appointed diocesan bishop, His Excellency John Yanta, found that he had 19 Planned Parenthood centers in his diocese. We had previously worked with Bishop Yanta in San Antonio, Texas. He asked us to work with his Respect Life director, Rita Diller, to close down all the Planned Parenthood centers. Rita, herself, was a person with a long history fighting abortion in Texas—having learned much in fighting abortion in Corpus Christi. Rita took over the local fight and began to expand it to things that we had not specifically done before. The most significant was to add bringing pictures of Our Lady of Guadalupe to Planned Parenthood. The results of having her image present outside abortion facilities in the heavily Latino community was immediate and dramatic. Babies were saved, prayer warriors were emboldened, and Planned Parenthood workers were quitting. It was not a quick fight, but in 2007, the last two PP facilities disaffiliated from Planned Parenthood and PP was gone from the diocese.

Following that very successful effort, Rita came to American Life League and helped us design and implement an effort we called “Bringing Jesus to Planned Parenthood through Mary.” This campaign emulated what had been done in Amarillo and had an immediate impact across the country when it was introduced in 2009. The next eight years saw unprecedented numbers on Planned Parenthood centers closing all across America. In community after community, Planned Parenthood was shutting down killing centers, less and less children were being exposed to Planned Parenthood sexuality indoctrination programs, and abortions in America began to decrease. With all this happening, Planned Parenthood went quickly through some presidents and was clearly becoming reorganized for a bigger and important battle.

In early 2019, Bishop Joseph Strickland of Tyler, Texas, tweeted that this country needed a Marian Blue Wave. This tweet was read by ALL president, Judie Brown, who immediately saw it as the next major part of our efforts against Planned Parenthood and our society.

The Marian Blue Wave is a call to action involving the praying of the Rosary with the specific intention of ending abortion. Our goals are many, but the first and most important one is to engage as many of our fellow Catholics as possible—especially priests and bishops—in projects to extol the virtues of praying the Rosary and use it to advance a call to holiness and evangelization.

We need this because the biggest reason why so-called pro-life politics does not work is because, even now in 2021, few people realize that every abortion kills a child of God—a unique human being with his own DNA.

With each and every Rosary we pray, we ask Mary to intercede for us in this struggle and to open eyes to the fact that every preborn child—from his single cell embryonic stage forward—is a member of the human family.

In his encyclical letter, Redemptor Hominis, St. John Paul II wrote: “The Son of the living God speaks to people also as Man: it is His life that speaks, His humanity, His fidelity to the truth, His all-embracing love. Furthermore, His death on the cross speaks—that is to say the inscrutable depth of His suffering and abandonment.” Thus, we also pray the Rosary to remind ourselves of all that Jesus has done for us and how much we should be doing for Him.

We acknowledge the fact that the wounds abortion has inflicted are the source of immense suffering in our nation, in the Church, and in the hearts of the parents of the aborted. Like Christ, the preborn child suffers unto death during an abortion, abandoned by the very mother who should protect him or her. This injustice drives us to our knees before Mary.

Our nation will not heal any other way, nor will we make progress toward ending the scourge of abortion until we embrace wholeheartedly our role in these crimes and begin the quest to heal our nation through prayer and education.

Our goal is simple. With the grace of God and the intercession of His beloved mother, we pray the Rosary for the conversion of our nation, for an end to the killing of the innocent, and for repentance and healing. The Marian Blue Wave can accomplish this as long as we persist and rely always on the will of God.

What would our nation be like if millions of Catholics prayed the Rosary every day for an end to abortion? That is the Marian Blue Wave.

Our prayer petitions include: